Like every wargame MeG has four main components: movement, shooting, fighting and morale. So before diving into any sort of game it helps to have the basics of how each of these works in MeG. MeG’s innovation has 3 parts to it: 1) a colour based system to control movement, 2) a matching set of colour dice that allow you to read off outcome results straight from the dice, and 3) an interactive turn where players alternate actions and are constantly involved.

Take a look at your coloured command cards. We use these for movement. They come in 5 colours with, from best to worst, RED – YELLOW – GREEN – WHITE – BLACK.

Take a look at your ten death dice. These allow you to read the results of combat, shooting and morale straight off the dice roll. They also come in 5 colours with RED – YELLOW – GREEN – WHITE – BLACK. Compare a RED one to a BLACK and you will get the gist! Skulls are good; blanks are bad!

To help you get the hang of the game we are going to do a little micro-game of just 1 ‘unit’ of Persian infantry with bow and short spear against 1 ‘unit’ of Greek hoplites with long spear. Within this small encounter is everything that matters about MeG.

MeG plays in turns made up of six phases: Card, Charge, Shooting, Movement, Fighting, End of Turn. You can see the full sequence on the QRS. We are going to give each side 2 command cards per turn but without a general attached (he/she must be with some other troops under his/her command).

While the QRS may look daunting at first, it is only because it contains everything for every army in every situation. Only a part of it will apply to any single army. See if you can find the bits that matter for these two ‘units’. Troops in MeG are described in a natural fashion so while you may not fully understand, I am sure you will get the gist of out two ‘guinea pig units’.

Persians = 6 bases of formed-loose, average, short spear, experienced-bow. These use the 3rd column for prompted actions table, move 3BW, have bows with a range of 4BW, and their short spear gives them +1 vs. anything in charge combat.

Greeks = 8 bases of drilled-close, average, long spear. These use the 2nd column for prompted actions table, move 3BW, and their long spear gives them +1 as long as they are at least 2 ranks deep.

Let’s play this minimalist version that gives you the essence of an entire game in a microcosm….

We skip to the turn 1 movement phase as there is no charging or shooting. Everything alternates in MeG with one side active (the Greeks) and having first choice for the turn. The Greeks want to get to the Persians. They have GREEN and WHITE cards from the card phase. Take a look at the QRS and you will see WHITE only allows directly ahead, but a GREEN lets them wheel so they do so. The Persians also wheel with a GREEN but move less than full to put themselves into bow range (4BW) but outside charge reach of the hoplites (3BW). THERE IS NO SHOOTING IN TURN 1 AS SHOOTING COMES BEFORE MOVEMENT IN THE GAME (this has lots of good effects).

Turn 2. Charge phase is first, but there are no charges. Shooting phase is next so the Persians release their arrows. Shooting uses the coloured death dice, with 1 dice for each file shooting. The normal colour is WHITE, which goes up or down for difficult or easy shots. Nothing special here, so the Persians roll 3 WHITE dice. The sword&arrow or X causes 1⁄2 a base of damage we term a wound –two of them kill a base so a front base is removed and the rear one moves forward to take its place,. In MeG, a big effect from firing is slowing down enemy troops and 2 hits (non-blanks) slow the Greeks by 1 BW so a 1BW slow marker is put on the Greeks.

In the movement phase the Persians are stuck! They have drawn the worst combination of two BLACK command cards and if you look at the QRS you will see there are no moves you can do with a BLACK (unless you have a general with the ‘unit’). The Greeks use a WHITE to go directly ahead but only move 2BW as they were slowed by 1BW – the chaos of walking over wounded and reforming ranks. At the end of any turn you can save cards or discard them and then you get replenished back to your initial number. The Persians of course dump the two BLACKs; the Greeks hold on to their precious RED.

Turn 3 and we have a charge phase. The Greeks play one of their RED cards to prompt a charge. In MeG shooting at chargers occurs in the charge phase, and then any other shooting happens in the shooting phase. So, the Persians get 3 WHITE dice again – but just get one wound this time, putting a W marker on the phalanx as its hits home and chooses to align its bases. We now have a fight. In MeG there are two fights each turn – charge combat, representing the initial 10 seconds of impact; and melee combat, representing a few minutes of subsequent fighting. The Greeks are feeling more confident now they are in combat.

Combat in MeG is one dice per file but this time both sides roll a dice and the colours depend on who has the advantage. We measure this by adding up claims. Look at the QRS and you will see if a fight is equal both sides roll GREEN, one down drops you to WHITE. You could get a double RED vs. BLACK but as our troops here only have +1 combat claims we are going to get GREEN and WHITE. The Greeks choose left hand file. It is all-even (+1 for short spear vs. +1 for long spear). Both sides get a wound, as the Greek are carrying a hanging wound from the shooting that converts to a kill. The second combat neither side does anything – two blanks.

Now troops are in combat they can only use two actions on the prompted action table – MF1 and MF2. Take a quick look at these. MF1 represents more troops being fed into an existing combat; MF2 turning to fight enemy to flank or rear. The Greeks play a red to MF1 two unengaged bases from left to right. This is an abstraction of the entire fighting base shifting in the melee, so don’t worry about the distance. The Persians have no use for double-ranks as they only got a claim in charge combat and use both GREEN card to do two MF1 moves and expand on each side (you can do as many of these micro-moves as cards allow).

We now have a fighting phase and fight melee combat. The Greeks choose the left-hand file first where they are GREEN vs. WHITE due to their 2 ranks with long spears and get a wound – which converts to a kill as the Persians have a hanging wound from charge combat. The Persians choose the file at the other end as in melee combat neighbouring files add a dice to help a fight (one colour down than if they fought frontally). So, they get a WHITE+BLACK vs. GREEN. They get a Wound, but the S has no special effects here. The Greeks get a Skull. In the middle the Persians have get two blanks, and the Greeks get a Skull and a Wound.

Morale now cuts in. With the final dice roll the Persians have dropped below 50% strength. In MeG bases lost are not kills alone, but measure degradation of morale and loss of cohesion. Having lost 3 bases and a wound the Persians rout and the Greeks pursue them. The way morale issues spread in MeG is that any Persian troops near to that rout would have a Kill a Base test on them where the opponent may cause a Kill, Wound or Slow on them, thereby weakening them for the future fight. You can find the red KaB table on the QRS and see a set of situations where there is a simple dice roll to damage an enemy ‘unit’ or general.

In that short demonstration you have the entire essence of a battle of MeG. All that happens now is you have more troops to fight with and the interactivity between players comes alive. But in any game the essence is simple:

1) MOVEMENT: use your command cards to get your troops into the best position. The prompted action table is the only table that really matters. It is the table of you being an army commander. Your real job is to master the prompted action table for your troops, knowing where to place them and when is the key to winning at MeG. Do this well, even without knowing anything about the rest of the rules, and you will do well. Of course, you need to design your army to have good command & control to do so, and to take advantage of your drilled romans ability to manoeuver well. Everything else in the rules is just outcomes.

2) SHOOTING: roll a single death dice per file to shoot and read the results directly from the dice. So shooting is very fast in MeG. Just try to find good targets for your best shooters.

3) FIGHTING: roll death dice against each other for combat and read the results directly from the dice. So combat is just a bigger version of the head-to-head fight between files you saw above. Just try to get advantaged combats where you keep your opponent on white dice. And try to get any S specials for your troops to work well.

4) MORALE: roll skull dice against the enemy for morale effects and read the results directly from the dice.

The beauty of the system is that you apply very little brain energy to outcomes, so most of your energy goes onto (1) which is you being a general. You spend 80% of your time on the decisions of the army commander and 20% working out the outcome, not the other way around. Of course, your real success in shooting and fighting is more driven by making good decisions in movement than the luck of the dice. So really it is all about the decisions you make as the army commander on the prompted action table. The buck stops with you!

Now you have the essence of MeG you are ready to dive into its world in all its death and glory. All you will find is a lot of variation of troops, and scale added to the basics where you play with 10-20 ‘units’ with widely varying characteristics, and thereby the subtlety of the alternating action system will come to life as you have to decide who to prompt when. Enjoy. Over a 1000 players are saying it’s proving very historical and a lot of fun. 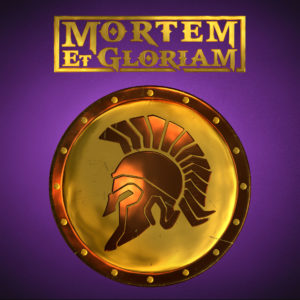 View all posts by Simon Hall
Skip back to main navigation

2 thoughts on “THE ESSENCE OF MEG WITH 2 UNITS”